Could it be 5 weeks in Mazatlan???

As I look at the calender, it must be so….we have been here longer than anywhere else so far. Some of that time doesn’t really exist for us, though, as we both missed about 10  (somewhat overlapping) days half dead with bird flu, or SARS, or some such illness. Glad to have gotten THAT out of the way during the holidays. So it really doesn’t seem so, but it is true. When we leave next week, it will have been over a month. We have spent it like most other destinations…relaxing, and playing tourist. We have also been busy with boat work, though we haven’t done most of it ourselves. Mazatlan has a wealth of boaty services, with good people at very reasonable prices, so we took advantage. The main reason we stayed so long was to wait for a package in the form of new solar controllers. Ours simply died about the time we got into Mexico, and we have no other alternative power source, so…..it had to be done.  Webo Solar came through for us with exactly what was needed, and there were no hitches in Customs, or anywhere else. John installed it all in one day! But of course, he then noticed a little problem with the engine, which turned out to be a leak in the raw water pump. Uh oh. Which led to the decision to go ahead and do our 1000 hour service, as he was so impressed with the folks dealing with the water pump. So….that has delayed us a bit. And, inbetween, we noticed some more stitching coming loose from the dodger, so….that had to be dealt with, and it was. Boat work is very plastic, it seems; it just changes shape from day to day depending on the area of the boat you choose to look into. No worries, though, as we have enjoyed our long break here at El Cid (and we got a lower rate after 14 days!)

Other jobs taken care of were getting Slappey washed, waxed, and the stainless polished. That was my Christmas present. Early on we got our teeth cleaned. Our dentist was a very friendly young woman who actually did the work herself. I’m not sure if they often have dental hygienists here. Her office was very modern, and the staff very friendly (Paty Ascencio, if anyone wants to know.) We also got haircuts. Well, I did. John’s hair was buzz-cut by me, with the clippers he got for Christmas last year. He’s always so happy to get out of the exorbitant price of his haircuts….about 12$ in the States, and who knows what it would be here, but it makes John happy. I didn’t leave any scalped bits this time. And, since we had very good wifi, we had no issues with mail or banking or hours of surfing (too many hours of surfing.)

The marinas here in Mazatlan are in a lagoon somewhat north of the main city. They are on the edge of what is still called the Zona Dorada, which has always been a tourist area lining the nicest beaches in the area. There are still several very nice hotels, timeshares, condos, etc., but the main drag leading into the city looks to have seen better days, to be honest. Mazatlan is a study in contrasts. There is a rising standard of living, as evidenced by new schools, new malls, lots of new cars, etc. But it has a plethora of dilapidation, too, with overgrown vacant lots, potholes, empty storefronts.  The area around the old Port is about the saddest, from what I could tell. There are still boats who go there to anchor, but I don’t know why. There is a lot of renewal going on around the old Centro, though, with some lovely streets, restaurants, galleries, etc. As in most cities, there is creative churn, and that’s a good thing. What I will remember most is that even though it is a big city, it has some of the friendliest people ever. As tourists, we mostly interfaced with restaurant and shop owners, and taxi and pulmonia drivers, in addition to the marine tradespeople. They all work so very hard for tourist dollars, and are gracious even when they don’t get them. We never met anyone who was rude, or surly, or unhelpful, or even impatient with us. Even people on the street, who noticed we needed to catch a bus, or find something, were happy to help us.  That is probably what keeps the retirees and expats coming, in addition to the nice weather and inexpensive cost of living.

Here are a few shots to give you the flavor of what we saw: 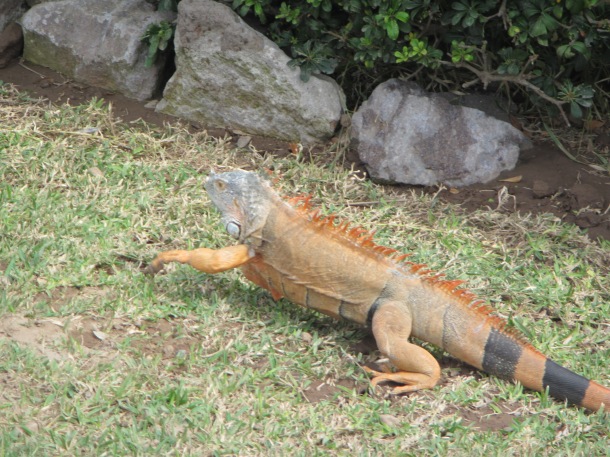 Cause they’re just so darn cute, aren’t they?

A nice hotel in the Golden Zone

continuing down the drag of Camaron Sabalo

And another one on the drag

Day of the Dead art 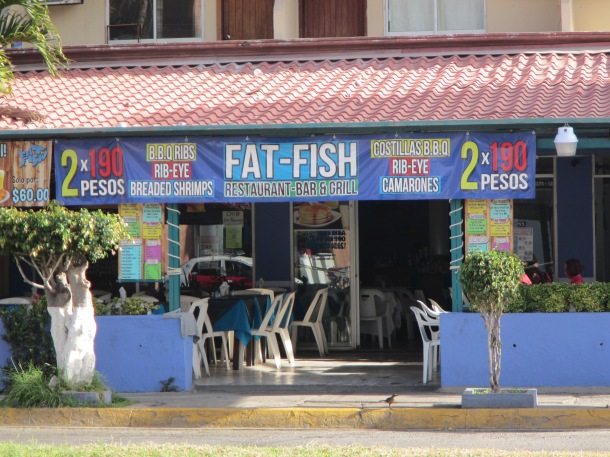 despite the name, best known for barbecued ribs, at 190 pesos for 2 people! 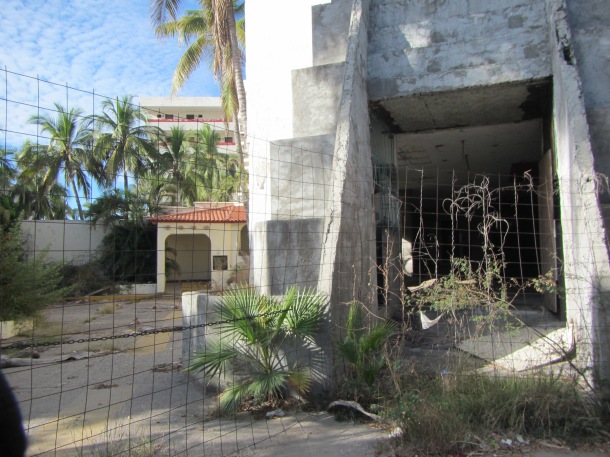 Unfortunate bit of dilapidation mixed in 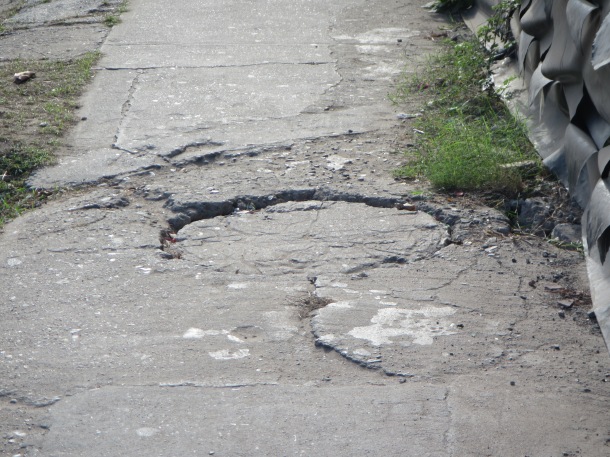 typical of the sidewalks, though these are not nearly as bad as those in Ensenada, where the holes were so big several people a week must lose a leg

Pulmonias! When you’re tired of walking, and the bus isn’t coming, jump into one of these 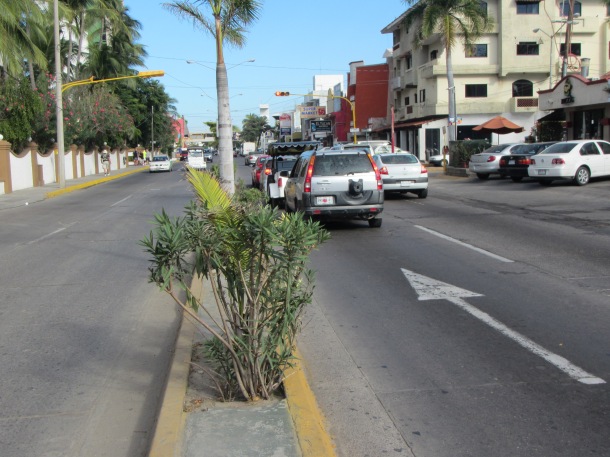 Only a matter of time before someone has to yell, “Bluehair down!!!” 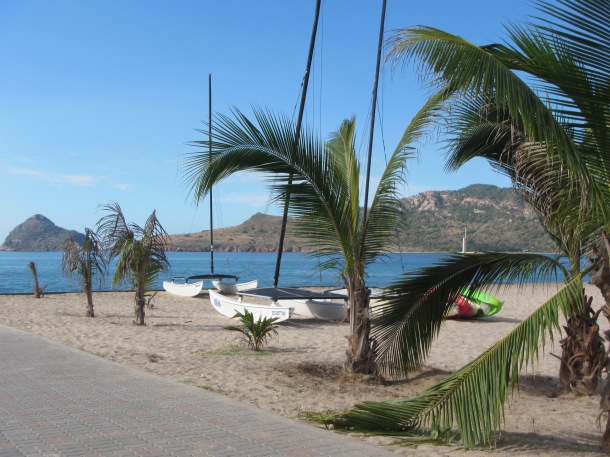 Very nice beaches line this side of the city 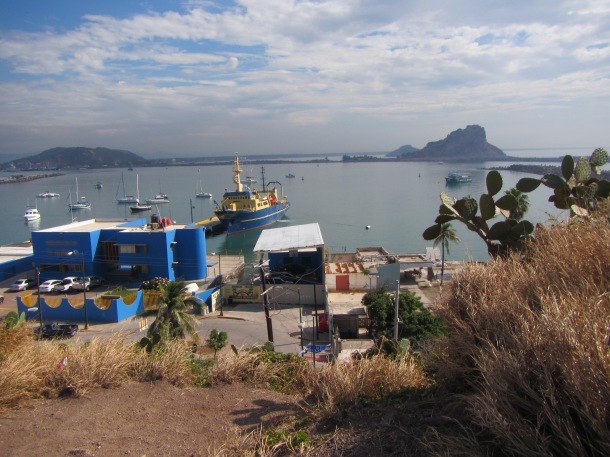 And this is what we climbed

You can take a ferry over to La Paz, on the Baja side; looks old and rusty, though

And this is where the stench of raw sewage comes from; another reason to avoid the old port, if you ask me 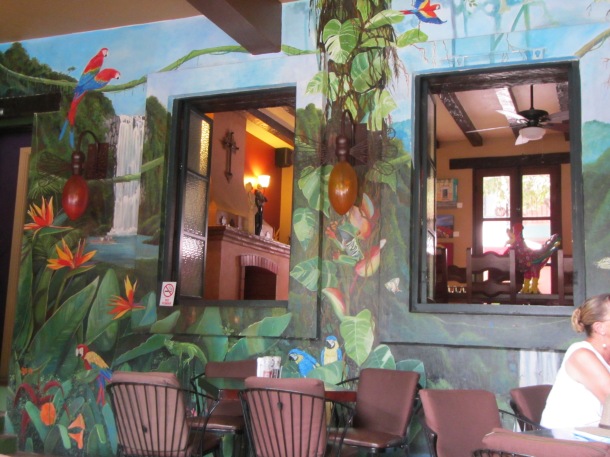 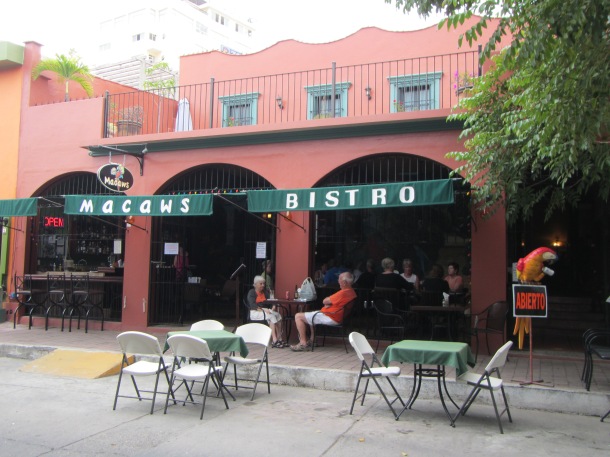 Books in English in a little subscription library, for all the expats; E-readers are eating into their business now, says the owner

Just some decorative block that I admired; lots of that around town 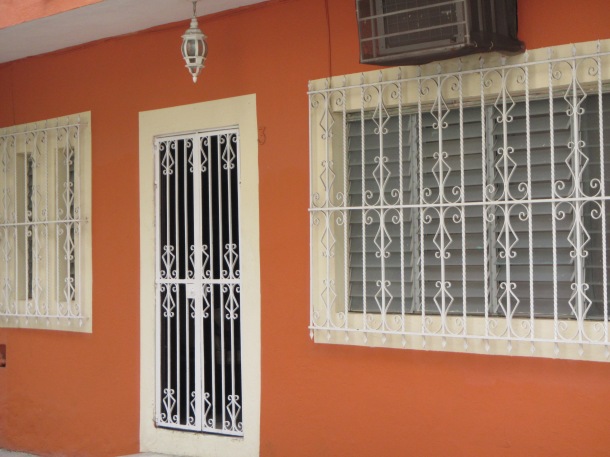 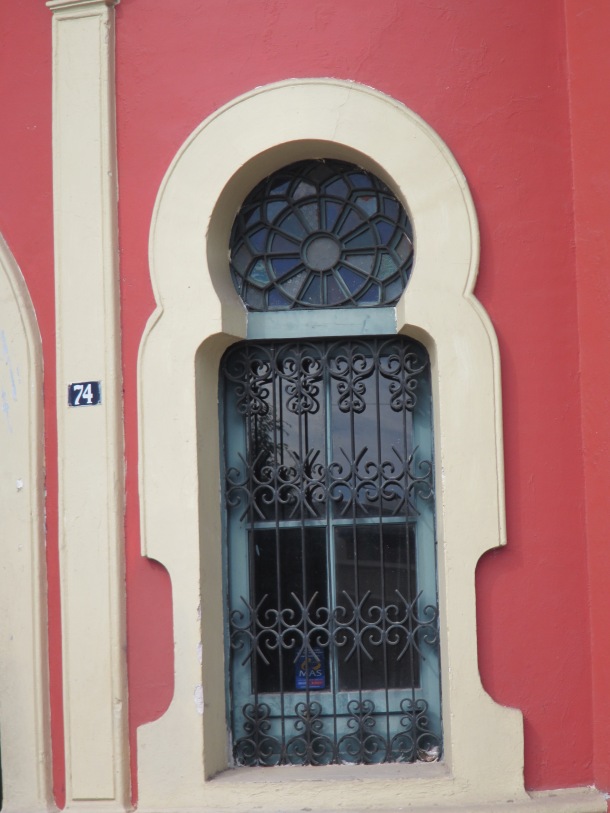 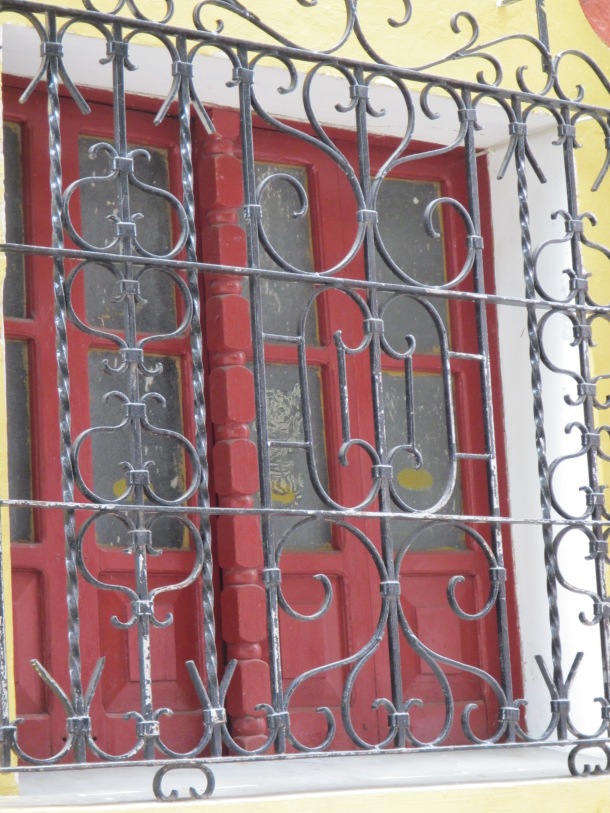 So enough of the grillwork, but you get the picture; it’s everywhere, and Mary really loved it

Another pulmonia! These ubiquitous open-air taxis zip around at tops speeds thru traffic, and….you’re not wearing seatbelts!

So that’s Mazatlan for you, and we have enjoyed our extra-long stop, but are anxious to do the other kind of cruising,  away  from docks and amenities. We strike out for Isla Isabel, San Blas, and points south later this week.

Posted in Uncategorized. Bookmark the permalink.